Below is a link with many comments from around New Zealand.
Earthquake felt in Wellington, In Gisbourne, several buildings collapse, felt in cars, damage to property...

In Hawke's Bay felt for some forty plus seconds, We went under the kitchen table, no damage to picture frames or ornaments falling off shelves like the pictures in Gisbourne.

see http://www.geekzone.co.nz/tonyhughes/4287 for some posts from people affected.

Gisbourne Earthquake
Posted by Helena at 21.12.07 No comments:

Te Poho, Porangahau, the land the people and their TaongaIn Review

It's been a busy week with many Christmas functions to attend at work. I am looking forward to catching up with my family for a few days.

I enjoyed checking out the new Opera Kitchen with the reference team at the refurbished Hastings Opera House and can recommend the fruitsalad, lemon tarts and peppermint tea. We sat outside in the main foyer with the roof open to the sun. This way we avoided the radio inside, which was too loud to speak over and could talk and enjoy the opera courtyard environment. The inside has a very contempory Hastings feel, with large tables like they've came from the freezing works. Chairs are not wide so just suit an average sized person and a very large person might prefer the option of a bench. However it is great to be in a cafe within the Opera Complex with good colour scheme and design and the food and beverages were up to standard with a good selection of fresh local produce.

Christmas in the Domain, Havelock North was another true highlight, the band and singers were outstanding with good support from sponsers and the community, free sausages and softdrink. There have also been some great school breakups and prizegivings which I have attended. 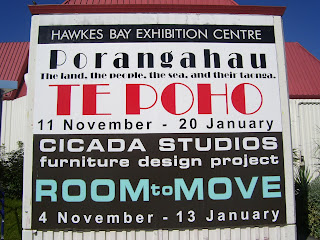 Te Poho, Porangahau, the land the people and their Taonga.

There is a very good exhibition on at the moment at the Hastings Exhibition Centre called Te Poho, Porangahau, the land the people and their Taonga. Porangahau is a rural coastal village and community in Central Hawke's Bay. It's about an hours drive south of Napier and is thirty miles from its nearest township, Waipukurau. I particularly enjoyed the large wooden carvings (Takitimu canoe prow) plus the flax work, the piupiu and korowai (flax skirts worn around the waist and around the shoulders as cloaks). Photographer Sal Criscillo (www.criscillo-photo.com) has captured some wonderful photography for the images in TE POHO of local people from Porangahau (Central Hawke's Bay. In their introductory brochure/pamphlet he writes, "The images in TE POHO started almost by accident. Assisting the two writers, Hilary Pedersen and Marina Sciascia in assembling their book " Haikui, Mothers of Porangahau", the Te Poho images grew out of the preparations, research and assembly of their second book "Tuhine, Sisters of Porangahau". However I did notice that there were several to many men photographed as well for example white baiters in the rivers with nets , shearers at work, interestingly some fox hunters plus many people with intricate moko and tatoos, historical photos of people gathered on Marae (Te Poho derives its name from Te Poho o Kahungunu, the meeting house situated on Rongomaraeroa Marae at Porangahau), and even pictures of Peter Sharples and Tariana Turia (MPs) with folk expressing their political support of the Maori Party. Also as I recall social club rugby shields as well as a display of greenstone (Paunamu) patu and mere, gourds decorated with flax and toi toi. At the front door is an very intricately carved oval shaped wooden vessel for holding taonga. I have seen these at Marae when there is a funeral next to the body. Inside are white feathers and tea tree leaves. I am not sure how old it is but I suspect I have seen it before next to a body on a Marae! Or perhaps one just like this.
The exhibition centre is located next to the Hastings Central Library.

Below are photographs of the piupiu and korowai 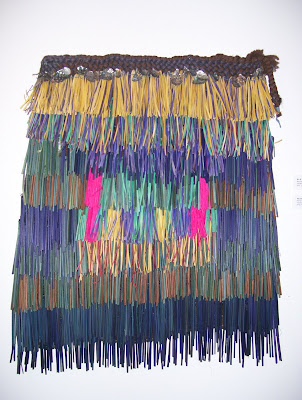 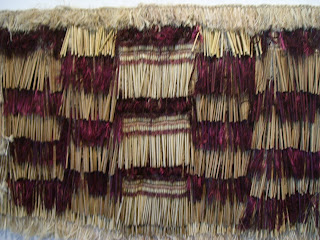 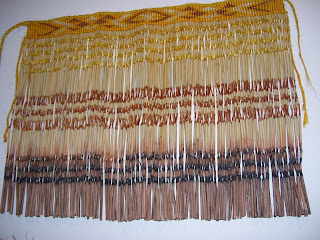 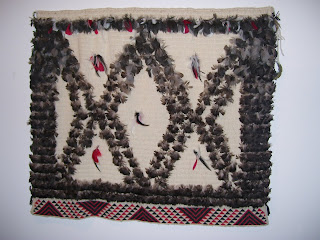 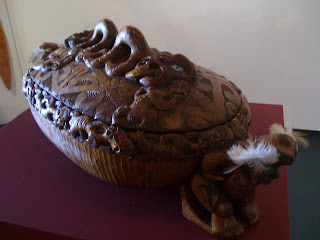 Porangahau: At the coastline is an eight mile stretch of sand interrupted only by the outfall of the Porangahau river which has a relatively large inland catchment across CHB farmland. These features, combined with a large estuary at the beach make for an ancient natural resource that has seen many generations of human occupation....
Porangahau (hapu) plus co-exhisting Pakeha rural community) also has a long relationship with Heretaunga, that continues today...
Hope you get to see it and enjoy like I did.


Of Note: The Parihaka International Peace Festival is coming up after New Year from the 11-13.
Helena

Latest Comment: Hello helena, I am Marina Sciascia, we have been wanting to know how to get our exhibition out to the world and found you. So thanks, you have done it.

"hello helena , thanks for your comments on our exhibition . from the gallery's feedback been probably their most attended offering in years . glowing comments all round.your comment about too many male photographs ? the pics grew from the two 'mothers and sisters' books probably 40 or so featured in the publications .. some of these are featured in B/w in the foyer but rather than repeat all ,the exhib photographs were an extension of the families i met and the land and sea scapes of the area.there was never any intention to show only the mothers and sisters for the wider exhibition . hardly a misreading of the exhibition itself but questioning your comment only. glad to see your recommendation to view. closes jan 20th so hopefully lots of holiday makers will also access. mille grazie
salcriscillo/photographer."

:)
Te Poho, Porangahau, the land the people and their Taonga.


Recommended Reading: How To Make a Piupiu by Leilani Rickard.

Also if you ever visit Te Papa in Wellington, there are many beautiful Piupiu to see there.
Posted by Helena at 18.12.07 No comments:

Email ThisBlogThis!Share to TwitterShare to FacebookShare to Pinterest
Labels: Porangahau the land, Te Poho, the people and their taonga, the sea

2007 New Recipe Books - popular Christmas gifts or simply for yourself!

Cook books are a popular gift choice at this time of year. Please enjoy the selection below. Most are new books first printed in 2007.

Complete Book of Indian Cooking: 350 Recipes from the Regions of India

Jamie at Home: Cook Your Way to the Good Life

Eat Fresh: Cooking Through the Seasons

The Italian Grill: Fresh Ideas to Fire Up Your Outdoor Cooking


Kia ora, arohanui,
Have a safe and happy summer break.


Interesting Feedback on the blog... this thinking reader writes;:
"I have heard that writers have a deep desire to write and can’t not. So I understand your posting various material on your blog. It struck me that a blog is like an advertisement. Except that we are used to people marketing a service, so we might sell our ability to do research. A blog seems like it is more than the selling of a service but also the marketing of oneself. Posting interests, abilities, movies seen, books read, knowledge gleaned, background, as well a profession. It is different – you know."

Thankyou! I agree, the blog allows you to document and share ideas. I've heard some describe it as scrapbooking! But it does develop your IT skills and anything that you do write that is of interest (such as my health and safety/first aid training, or ezine scripts or explanations, of RSS, wikis, google reader and also the nice photos) can be easily shared with others. I can also change the level of my privacy down the track and restrict readers if I choose by changing my settings. I am trying to avoid becoming one big advertisement whilst promoting the occassional affliate product. But I think the nature of short blog posts does allow for a diverse and different range of non demanding yet personalised writing. So it should be a showcase of whats going on somewhere at sometime. But it doesn't have to be a life monument or to encapsulate more than the 10 minutes or so you've devoted to the blog. It should assist with your ability to do research and assist with the marketing of yourself that is true.

Email ThisBlogThis!Share to TwitterShare to FacebookShare to Pinterest
Labels: Music

This day in History: Chases.com

As a reference book for world history the latest volume of Chase's Calendar of Events is an articulate read and provides comprehensive coverage of many key events in a succint, compact and illustrative way. The matching website(see extract below)also provides good monthly coverage of then and now; this time in history.

The 50th anniversary of Chase's Calendar of Events....

In 1980, John Lennon was shot and killed in New York City by a deranged fan.
In 1991, the Soviet Union was dissolved.


Tanzania: Independence and Republic Day
National Day of the Horse


Human Rights Day
Birth anniversary of American poet Emily Dickinson (1830-1886).
There is no Frigate like a Book

To take us Lands away


In 1936, uncoronated King Edward VIII of England abdicated his throne to marry "the woman I love," Wallis Simpson.
In 1946, UNICEF was established.
International Mountain Day

Ask a question here.
This blog is currently working like a scrapbook to assist me to order content.