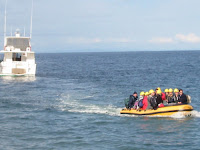 A broken winch on the Japanese whaling mothership stranded in the Ross Sea has ended this year's whaling season, according to Greenpeace.


The whaling ship Nisshin Maru, which used the winch to haul the animals' carcasses on board for processing, remains stranded in the after last week's onboard blaze.

Karli Thomas, a campaigner aboard the Greenpeace vessel Esperanza, said the environmental organisation's offer to tow the ship out of the pristine Antarctic sea remained open.

The Nisshin Maru is rafted up between two other ships from the whaling fleet, the tanker Oriental Bluebird and the smaller whaler, Yushin Maru.

The Nisshin Maru sent out a distress call from the Ross Sea early on Thursday last week after a fire erupted below deck.

Maritime authorities in New Zealand have urged the Japanese to accept a tow so the ship at least can be moved north and away from Antarctica.

That way, they say if it founders and leaks the 1000 tonnes of fuel oil, heavy chemicals and pollutants on board, the chances of a huge environmental disaster will be reduced.

They have urged the Japanese to accept an offer of a tow from their long term adversaries, Greenpeace.

Since the fire, some electrical power has been restored and a three-degree list, caused by the water used to fight the fire, has been corrected using portable pumps from other whaling ships.

The Japanese skipper had told authorities he would rather stay where he was where the weather was calm instead of being towed north into worse weather.

He also said towing was an art and while at least one of the Japanese ships, the Oriental Bluebird, should be equipped to tow, it was not the most suitable towing ship in the area.

Spokesman for the whalers, Glen Inwood, disputed Greenpeace's claims about the winch.

"It is certainly not in anyone's interest to give any information, or correct information, to Greenpeace. They are not a signatory to anything down there. Maybe the skipper was just having a laugh," he told Radio New Zealand.

The ship's wiring had been replaced, the gauges had been tested and safety checks were being carried out.

Though the ship was not yet moving, the engines were going, Mr Inwood said.

The decision would be made today on whether the hunt would continue or the fleet would return to Japan, he said.

The main concern was whether the processing deck was able to be used again, following extensive damage during the fire. There was a legal requirement for all whales caught for scientific purposes to be processed, Mr Inwood said.

Most of the meat already processed and packed into the freezers was still frozen, though some must have been damaged in the fire, he said.

Source NZ herald - there are many environmental issue stories/themes well covered by this press.
Posted by Helena at 14.3.07